Sorry! Your browser is not supported.

To view this site you can download a newer version of Internet Explorer.

We are New Zealand's largest processor of Perlite and Zeolite 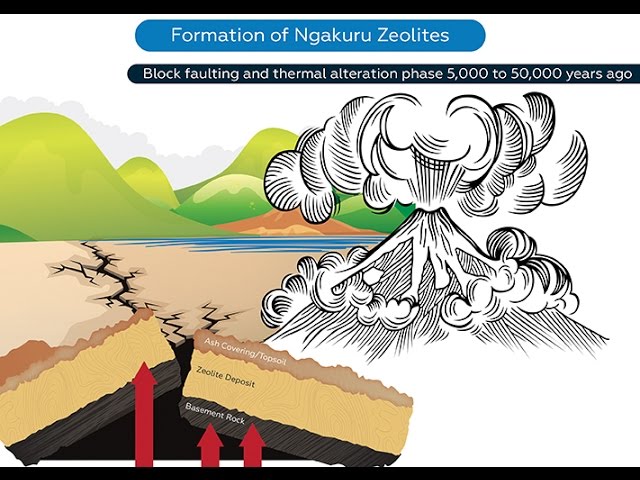 Zeolite is a natural mineral created many years ago by volcanic ash falling into an alkaline water source and being put under pressure. This pressure combination resulted in a three dimensional framework structure of silica-oxygen tetrahedra. The crystal framework is in a honeycomb network with pores and is one of the rare minerals that possess a natural negative charge. The combination of the honeycomb structure and the net negative charge allows zeolite to both absorb liquids and adsorb compounds. The negative charge is balanced with cations such as calcium, magnesium, potassium and sodium. These cations can be exchanged. Click to view video - all about zeolite

How were they formed in NZ?

About 250,000 years ago, in the Rotorua/Taupo area, intense volcanic activity generated huge ash showers which were washed and eroded into lakes forming sediment beds up to 80 metres deep. Subsequent sub-surface thermal activity forced hot water (120 C) up through these beds transforming the clays into soft rocks with ordered internal structural sequences which are now called zeolites. Also at that time severe block faulting drained the lakes exposing many deposits. Subsequent ash showers covered some of the deposits to depths of 30 meters.

What type of zeolite?

There are about 40 different zeolite types and their occurrence depends on conditions during formation. The Ngakuru zeolites located in the Taupo Volcanic Zone of the Central North Island of New Zealand are predominantly mordenite and clinoptilolite. The location, duration and intensity of the thermal water flows during formation determines the degree of thermal alteration. Deposits close to thermal fissures are fully altered and often mechanically strong whilst those further away are often poorly altered and can breakdown into constituent clays.

How does zeolite work?

Ionic adsorbing power
During the thermal alteration phase amorphous material was washed from the clays leaving a 3D skeleton of aluminium and silica oxides which due to a unique configuration have a high negative charge (cation exchange capacity, typically greater than 100 meq/100g). Positively charged cations in solution (or molecules suspended in air) can be absorbed onto the latticework and depending on pH, cation concentration and charge characteristics can later be released.

This combined honeycomb framework and net negative charge, allows Zeolite to both absorb liquids and adsorb compounds. Zeolite works both like a sponge and a magnet; soaking up liquids and exchanging magnetic compounds, making it suitable for a variety of purposes from eliminating odour to cleaning up oil spills to reducing nitrogen and phosphorus leachate on farms.

Physical absorbing power
The 3D-lattice work also gives zeolite another property of large internal surface area (up 145m2/g). Geologically young zeolite like those found at Ngakuru are able to absorb more liquids than other, older, glassy zeolites. When dried some of these zeolites are able to absorb up to 70% of their own weight as liquid. Each characteristic supports specific uses however the dual capacity enhances certain uses. For instance, in a sports turf situation zeolite will:

Blue Pacific Minerals Limited has two quarries with total surveyed deposits exceeding 10 million tonnes. Zeolite from each of the quarries is unique.

One quarry contains zeolite that absorbs odour and liquids extremely efficiently and is therefore used as pet litter, as a granular oil/chemical absorbent and as an odour absorbent for composts etc.
Another quarry contains zeolite that has a high cation exchange capacity, absorbs liquids but is very resilient to mechanical breakdown. This product is excellent for absorbing cations from wastewater and as a base for slow release fertilisers. Zeolite is also recommended by the New Zealand Sports Institute as a suitable additive for sand-based sports turf areas, in particular golf and bowling greens.

Thanks for providing your details. Click the button below to download your resource in a new browser tab. Please contact us if you have further questions.